With around 75 Master Planned Communities in the Las Vegas Valley, we have an entire page and multiple home searches just for them. Living in a master planned community means that everything around you will look nice when you are within the community. Master Plans are about an active lifestyle giving you a sense of community.

At the same time, all the landscaping is meticulously maintained and continually beautified. There are architectural guidelines and color schemes that tie every neighborhood together. Each master planned community will have design criteria specified by the developer that the neighborhoods must comply with.

This will include small but important things like the length of a homes’ setbacks from the sidewalk and the roof tiles’ type and style. Also laid out for the developer is the entry gates’ style, color, and block type for the walls. Furthermore, parks, walkways, signage, and plant varieties that may be used within the neighborhood are also among the specifications.

What Is A Master Planned Community?

A Master Planned Community is a community with many neighborhoods in every price range. Before any dirt is ever moved, everything is predetermined. Once everything is planned, and legalities are handled, builders are selected who will ultimately purchase land and the rights to sell within the community. 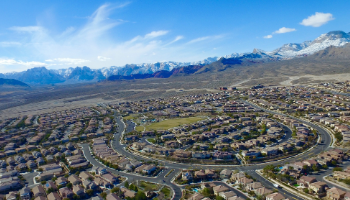 Prices will vary depending on how elaborate the amenities within the community are. For example: Is the Community Guard-Gated? Is there a Clubhouse or a Community Center? How much land do walking trails and parks occupy? Is there a community pool or lake?

Keeping demographics in mind, there will be a multi-family condominium or townhouse neighborhood and a higher custom or semi-custom neighborhood. Next, neighborhoods are filled in at every price point, and home size, adjusting as the community starts selling homes. The developer will bring in infrastructure and provide perimeter walls, main access roads, and master plan amenities.

Developers will do their part usually while a builder is building their model homes. Not only do developers build infrastructure, but they also become the watchdog. It’s important to ensure the builder follows the rules, laws, and air quality guidelines. For larger master-planned communities, they’ll have the main builders sell out most of their homes before opening another neighborhood.

Depending on the size and location of a master plan, schools, fire, police, roads, parks, retail, and medical are slated before homes. Professional buildings and different business locations are placed around the perimeter to provide support and employment for the community.

Housing In The Master Plan

With everything planned at one time and underground infrastructure installed, neighborhoods look nice. Looking at the picture below, you can see schools, parks, a flood control channel, and the businesses around the outside. You can see the largest home lots around the golf course and how curvy streets can add peace and relaxation to your commute. Curvy streets and roundabouts are also known to slow down drivers with lead feet making the area safer.

In the top-middle of the picture, you can see how homes are scattered with vacant land interspersed. This is a clear sign that that section is not in a master-planned community. In Las Vegas, you may be sure that the surrounding homes experience dust, dirt, and possibly water control problems. 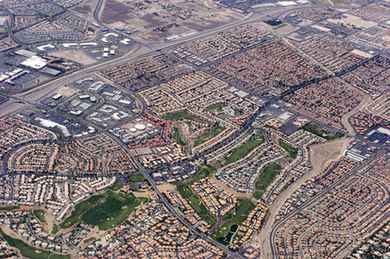 Master-planned communities fill in systematically, so dust and building noise stop as soon as possible. To me, these well-maintained communities feel healthy and luxurious, and I smile driving through them.

Due to the cost of land, the vast majority of homes are two-story family-sized homes. Most areas will also have a neighborhood with all one-story homes. Some master-plan developers prefer their builders to offer at least 1 one-story floorplan. Others will make entire neighborhoods of one-story homes. ADA compliance is built into every master-plan.

The developer manages the association (collecting a monthly management fee) during the construction process. Builders only handle association matters until a neighborhood is completed. After completion, communities are turned over to the neighborhoods to manage. Almost all of them hire a property management company to manage the day-to-day affairs.

Typically there will be two associations for each household, each with their own set of CCR’s (Codes, Covenants, and Restrictions.) You will have a smaller association

(sub-association) for your neighborhood with its own Board of Directors and quarterly association meetings. Then there is the larger master association covering the entire community.

When I was on the board in our community, management was extremely careful about maintaining equality. It was important not to set any precedents that were not following previous rulings. Being on a neighborhood board of directors is something that I think everyone should try. You’ll meet your neighbors, and it will help you further understand why master-plans work so well. 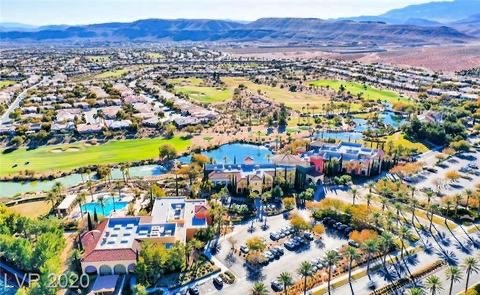 Master-Planned Board Of Directors

Occasionally someone we work with may complain about an HOA board member who is the policing type. Master-planned communities may seem strict; however, the law says that associations must treat every household equally. The Nevada Ombudsman Office is the governing office that holds each homeowner’s association accountable in Nevada.

The Pros of Master Planned Communities

Roads and traffic flow, with a 30-year growth plan, are also taken into account. All wiring and utilities have been placed underground since around 1990. Master planned communities are also pretty and decorated, usually with some kind of hardscape or architectural feature. In the valley, there are about 75 master planned communities, some being quite small.

Depending on when the community was designed, it will have different features. Early master plans like the Lakes in Las Vegas and Green Valley North in Henderson are still lovely even though they lack the trails and neighborhood parks that we see today. 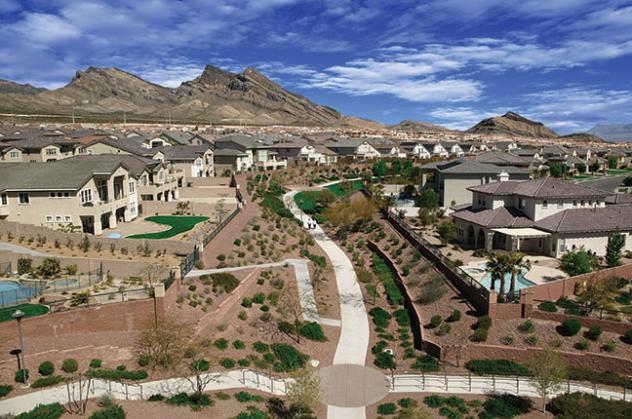 Today we see more common areas even though the cost of land for these areas raises the price of homes. People are willing to pay more for beauty and to live the lifestyle a master-planned community offers. Homes in master planned communities retain value and appreciate well because of the demand for living in these neighborhoods.

Green Valley in Henderson was started in 1978, and every neighborhood is still beautifully maintained. Living in these areas enables everyone to know that their neighbors will pull their weeds and not have peeling paint, maintaining the value of the community. If you can afford to pay more per square foot, most people consider their housing investment safer.

The Cons of Master Planned Communities

Some communities have odd rules. One community fines homeowners $1000 if their trashcan is left out for over 24 hours. That’s unusual- most master-planned neighborhoods don’t want the trashcans to be seen from the street 6 days a week.

Master-planned communities will typically not allow things with vehicles- no unregistered or non-operational vehicles, motorhome restrictions, no “repairs to vehicles in the driveway, etc. As prices within a community go up, the number of rules also increase. Mainly rules are to make the neighborhoods safer. A great example is no street parking for residents. Strange cars stand out so they’re easier to detect.

If you do not want to comply with a neighborhood’s rules, call us, and let’s find you a neighbor that works for you. About 90 percent of homes in the Las Vegas Valley will have CCR’s to protect the homeowners. When we make an offer on a home, you will have 7 days to review and approve all CCR’s after you receive them.

History of CCRs In Southern Nevada

Master-planned communities became a Las Vegas lifestyle choice in the early 1990s with the introduction of Summerlin. Summerlin is the largest master-planned community in the United States. Occupying the entire west side of the valley, near Red Rock Canyon, other builders watched and learned.

I find CCR’s to be common sense. On the other hand, some people prefer more freedom. Maybe you have an RV to keep at home, tall antennas, or you work on vehicles. Those things won’t work in a  master-planned community. If you don’t want strict rules, there are some out there.

Having sold homes for 25-30 years, we are aware of many neighborhood’s CCR’s. First of all, you will want a home older than 30 years old, and some 1/2 acre plus lot homes are not restrictive. It’s important that you live in a home that’s right for you, and master-planned communities are not right for everyone.  Contact our office, and we will find the right neighborhood for you.  702-750-7599

Take a 3-Hour Area Tour With Us

With so many master planned communities in Las Vegas, we often show clients their options. If you are unsure of where you want to live in the valley, let’s do a 3-hour tour so you can see the areas and amenities first. With three cities in the valley, each one has a different feel and price point. Let us show you the areas and amenities if you’re unsure where you want to live. Contact us to schedule a housing consultation today.