Mesquite is conveniently located only 80 miles north of Las Vegas along I-15 in Nevada’s Virgin River Valley. Only 39 miles from St. George, Utah, enables residents a near-by shopping and dining destination as well as medical resources. Surprisingly the the east side of the city borders Arizona. The speed limit on I-15 is 75 MPH, so it’s a quick 1-hour jaunt from home for millions of Las Vegas Valley residents.

Halfway between Las Vegas and Mesquite is The Valley of Fire State Park. During the spring, the wildflowers are stunning and worth the drive. 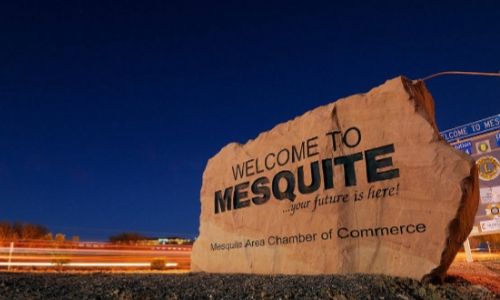 The hills around Mesquite feature red rocked mesas and help make the drive interesting. With Utah right up I-15, going through the Virgin River Gorge into St. George is a treat. We also enjoy day trips to Zion National Park, which is 90 minutes up the road. Duck Creek, Utah, is about 2 hours as well as Brianhead.

The town has over 20,000 residents, shopping, a car dealership, movie theatres 3 hotel/casinos, timeshares, and 6 golf courses. Mesquite’s advertisement and entertainment focus are geared toward the Las Vegas and Utah stay-cation visitors. The Las Vegas NASCAR races fill their hotels as well.

Due to Nevada’s tax structure, tourists and gambling taxes pay the bills. Mesquite has a great market share of tourists. Employees are always in need. With the area growing with locals and retirees, businesses open regularly, and the city offers great opportunities. 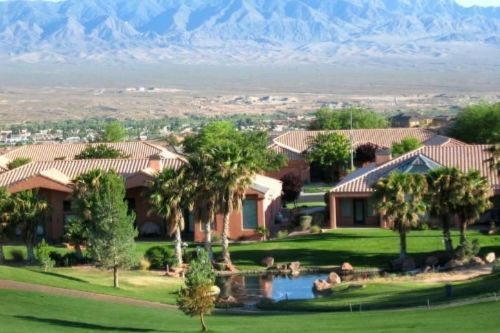 locals, families, and travelers. The Virgin River is home to the only hotel with a movie theatre and large arcade. The Eureka has great food specials geared towards enticing locals.
Casablanca Hotel and Casino has a showroom, a marvelous pool, and a world-class spa making it a great Couples Getaway destination.

Subsequently, Stay and Play packages, timeshares, and a friendly atmosphere keeps Mesquite energize the economy. These packages have also made Mesquite a getaway destination for Las Vegas and Utah tourists.

Since most homes were built in the last 20 years with a large retirement demographic, homes tend to be one-story ranch-style
homes on mid-sized lots. There are more and more communities with golf courses as an anchor.

The number one new home builder in Mesquite is Del Webb. All builders in Mesquite pay for you to have buyer representation without affecting the price of the home. I am a retired building engineer P.E., C.E., and a 24 year Las Vegas Realtor. Not only do I help you find a home if you buy a brand new home, but I also monitor the construction for you every week. I do the builder’s walk-thru for you or with you and gift you a final inspection by the best New Construction Inspector in Southern Nevada. With how quickly homes are built in this area, you want protection.

The prices of homes in Mesquite are attractive, and adding a golf course to the equation is not too much. Add community centers and activities to a community, and Mesquite living attracts many retirees.

Prices for homes start at under $200,000 for a home that is less than 30 years old. The area is affordable for both retirees and families who enjoy the outdoors and great air quality.

You can see listings for all of the homes for sale in Mesquite below. On our website you can save FAVS to a private box and come back to later- Bookmark It. Save your search to be notified when a new home is listed with your specifications. We will never SPAM you.

Mesquite is a great place to live, especially for people who like a slower pace, appreciate entertainment, and enjoy the outdoors. Our clients like seeing people they know around town while enjoying Nevada’s tax benefits and having the “Entertainment Capital of the World” an hour away.

In addition to selling Las Vegas, North Las Vegas, and Henderson homes, we sell homes in 13 additional Nevada cities. If you have any questions or would like to see homes in different areas, contact us.

Mormon pioneers founded Mesquite Flat in 1880. The name was shortened after a third try to populate the valley. Twice since the city’s founding, the Virgin River flooded the farms in the valley. After the floods, farming was the big draw for relocating to the community.

In the 1970s, when the Peppermill Hotel and Casino opened, jobs attracted new residents. In 1984 Mesquite became an incorporated city and continued to grow and prosper; however, most of its growth occurred after 2000. Mesquite, Nevada, was named “one of the Top 20 Fastest-Growing Towns in America” in 2006, and people paid attention. 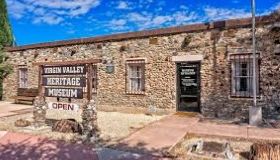 It’s worth spending an hour or two visiting the Virgin Valley Heritage Museum and their local displays and artifacts. Exhibits feature the story about the Mormon pioneers settling in the valley and the local history, but I look at the old pictures. The building that houses the museum was built in 1940 (that’s old for here) and is currently listed on the National Register of Historic Places.

Mesquite schools are part of the Clark County School District. There are 3 public schools in the valley. They are Virgin Valley Elementary, Charles A. Hughes Middle School, and the Virgin Valley High School. Mesquite is part of the Las Vegas Clark County Library District. The LVCCLD is one of the best in the country. There is a Mesquite branch, and online materials are abundant.

Explore Further: Read our blog on other areas of the Las Vegas Valley.