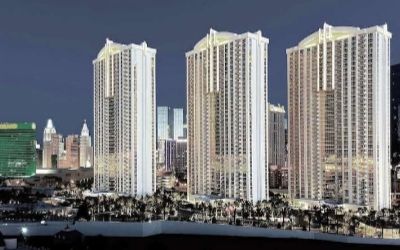 Owners also have the choice of living in their condominium or putting their unit into a rental pool to derive investment income from it when not in residence. The in-house management handles all the details. Because the Towers are also a hotel, guests and residents alike enjoy room-service and cleaning crews.

All guests and residents have access through an underground walkway to all MGM Grand features including their numerous pools, shows, nightclub, lounges and over 20 restaurants.

The amenities and service at Signature Towers are world-class. The property is a AAA 4 diamond resort.

The shared common areas within Signature include the renowned Grand Spa- which my wife loves. The concierge service will book everything for you from babysitting to weddings, tours, shows and flowers. Valets take care of your vehicles and luggage. Everything is done with smiles and quality service. All pools are heated with cabanas and poolside cocktail service. There are also lounges, bars and restaurants also conveniently located at the Signature. valet parking and concierge service

As an owner of an investment property, there are tax benefits. Costs of investment, expenses and depreciation are write-offs.  Trips to check on your property are also write-offs. If your unit is used to generate income, MGM provides you with monthly and annual statements. this can be very attractive to investors.

MGM Signature Towers were built as a way to bring guests to MGM Grand hotel and casino. Once a building was built, luxury residences were sold to homeowners and timeshare companies. Association fees vary per size of the unit starting at $639 a month and go up to $2093 depending on the size and views from the residences.

As a result of MGM Signature being successful and a first-class property, homeowners have recognized appreciation.

Having these higher-end homeowners and vacationers at MGM Signature for a week brought more people into their hotel and casino every day. Having more guests at their hotel, casino and pools increase their dining income, shows sales and gambling revenue.

Once the building loans were paid off by unit sales, all upkeep was paid for by HOA fees. A percentage of the rental from residences covers management costs. This project was a big win for homeowners and the MGM Grand.

When the recession occurred in 2008 there were many high-rise projects being built. Some developers saw the Hotel-Condominium option as a way to save their investments.

MGM Signature Towers were the first Hotel Condominiums in Las Vegas, and they are highly successful. There are now 6 high rise developments in Las Vegas whose CCR’s allow nightly, weekly or short term rentals.

There are 6 Hotel-Condominium Buildings in Las Vegas.

The other 5 Hotel Condominiums are:

A Hotel Condominium is usually a condominium where you can:

1. Live there as a full-time resident

2. Use your condo as a vacation home

3. Rent out your condo as a long term rental property

4. Use it when you want and rent it out when you are not in residence

Each Hotel Condominium has its own guidelines and fee structure. Ask us for more information if you are interested in a particular building or residence.

Most of these towers became Hotel-Condominiums as a way of getting cash flow and selling more units after the recession and housing crash of 2008-2011.

There were a lot of Las Vegas high rise condominium towers that finished their build in 2007-2008 and about that time money was no longer available with just a signature. Pre-sales fell through as prices were dropping weekly. Many existing homeowners went into foreclosure so HOA bills weren’t paid.