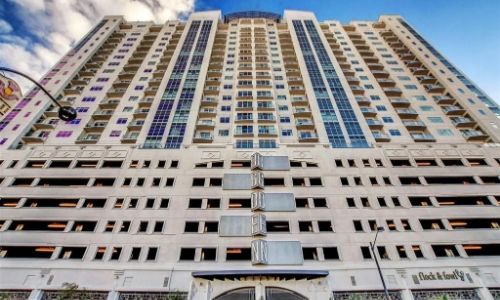 The Ogden Las Vegas is worth checking out! With a fabulous Downtown Las Vegas location, these luxury condominium residences offer it all!

Are you looking for a luxury condo with great views and a contemporary atmosphere? A high-rise loft or a second home?

Maybe you want a place close to work with access to Downtown Las Vegas and the Las Vegas Strip?

Downtown Las Vegas Offers It All

Downtown Las Vegas is the home of art, music, legal, business, and now 6 mid-rise loft and condominium towers. Residents at The Ogden Las Vegas enjoy its contemporary architecture and the expansive views seen from every angle and every window. The Ogden Las Vegas is 27 floors high with incredible views of mountains, city lights, and possibly The Las Vegas Strip. There are 275 condominiums with five floors of parking in the condominium complex. Residences range from 1-3 bedrooms and from 870 – 2000 square feet, with prices starting around $300K.

The ground floor is a combination of the lobby and mixed-use retail designed to please the most discerning resident. There are currently two eateries and a laundry/dry cleaner within the building’s commercial space. Condos for sale at The Ogden Las Vegas offer a broad range of floor plans. You’ll find your floor plan to be as spacious as many floor plans in single-family houses. This is luxury living without the upkeep that comes with traditional home ownership.

Amenities of The Ogden

Residences at The Ogden Las Vegas were designed for luxury and views, and they were successful. The finishes are contemporary, with lots of wood and stone. You’ll find floor-to-ceiling walls of windows that compliment the entire open feel of the floorplans. 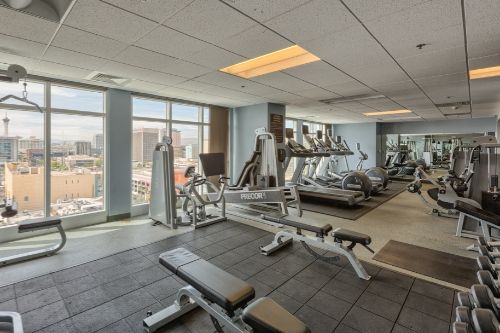 The Ogden Las Vegas condos boast a rooftop pool surrounded by a sun deck and lounge chairs for entertaining and sunning. You’ll especially enjoy the transparent enclosure wind block wall surrounding the roof to enhance the useability of this great space on windy days and evenings. This pool deck adds a lot of romance and fun to the building.

History of The Ogden

During the early 2000s, Downtown Las Vegas needed to rebrand itself to compete with the mega-resorts on the Las Vegas Strip. The first improvement came with the Fremont Street Experience. Next came businesses, sprucing up, and residences. With all of the new companies coming into the heart of Downtown Las Vegas, high-rises and lofts were a logical choice. Zappo’s, with its younger tech staff, was an ideal target customer as well as many construction company staffers.

In 2005, the city approved “The Streamline,” now The Ogden Las Vegas. The Streamline was initially proposed by a group of investors that included former Las Vegas Stars baseball player Dusty Allen. This impressive complex was completed in May of 2008, just in time for the recession to take its toll. It sat empty for months.

A few units were sold, legal battles started, and in 2009, The Streamline was foreclosed on. Thinking out of the box, 2010 was the year of renting out the building. A rebranding in 2011 with a name change to “The Ogden,” which is the street on the building sides, also helped the growth.

Going From The Streamline to The Ogden Condominiums

Fast forward to 2013, when the financial recession was ending. The tower was purchased again by an investor who started selling residences after the leases expired. Residences were revamped and sold to happy homeowners as they became available. The entire building was finally sold out by the end of 2019. It took ten years, but The Ogden Las Vegas is finally the gem that it was intended to be. It’s also fun and a great place to live.

As a resident of The Ogden, you’ll enjoy secure card key entrances and strategic security cameras. There is a 24/7 security team to see to your safety. Valets park your vehicle and carry packages to your door for you. The concierge will order flowers for your loved ones or book an evening on the town for you. Impeccable service adds to the luxury experience of making The Odgen Las Vegas your Downtown home.

In the 12 years since Streamline was completed, Downtown has completely changed. The Fremont Street Experience received a makeover in 2019 by getting a new Vivid Vision Canopy with an interactive app. There are two band stages, and street performers now have assigned circles to perform in with rules.

In 2019 we also saw the completion of Project Neon, a billion-dollar freeway project. Among other project legs,  direct access was provided to Downtown Las Vegas’ main access streets from I-15. The Downtown Events Center opened, which hosts numerous concerts and events, drawing large crowds.

The D and the Downtown Grand Hotel have also opened. Other hotels have had expansions and remodeling done. Six condominium/loft buildings and Veterans Village have brought residents to the area. This has ultimately kept businesses that are not on Fremont Street going at night.

If you would like to inquire about real estate listings at the Ogden or see a condominium or loft at The Ogden Las Vegas, let us know. All viewings require a 24-hour notice. There are also 15 High Rise Condominium Developments on the Las Vegas Strip, 6 Downtown, 3 Off-Strip,  and 1 in Summerlin. Prices range from the mid $200Ks and up to $10M.

However, condominiums without views and mid-rises off of the Las Vegas Strip on Las Vegas Blvd. South, and in Summerlin, Henderson, and Lake Las Vegas, all are stylish and you’ll pay a lot less money. Luxury Townhouses and Golf Villas may be another option for you to consider for your housing needs. Feel free to explore further on the links below.

When searching listings on our website, you can filter results in the top-right corner of any search and save your faves to a private box to come back to anytime. You may also save your searches and receive automatic notifications when new listings matching your criteria become available. When viewing real estate listings, know that information is deemed correct but not guaranteed. If at anytime you’d like us to do anything for you, feel free to call or send us an email. Have FUN!

Henderson Homes For Sale With Pool