The water-front homes for sale in Las Vegas are only in two different neighborhoods. Henderson has one neighborhood and North Las Vegas Water Front homes are non-existant. When water restrictions came about in the late 90’s and early 2000’s, water features transformed to dry rock hardscapes. However, lake communities survived.

No communities have been built with a large water feature since Lake Las Vegas started building homes in the late 1990’s. With water-front properties being a “thing of the past,” the value of water-fronting homes remains strong in Las Vegas. Water-front homes for sale are rare but worth keeping your eyes open because they’re stunning. Homes within the neighborhoods are pretty great too. 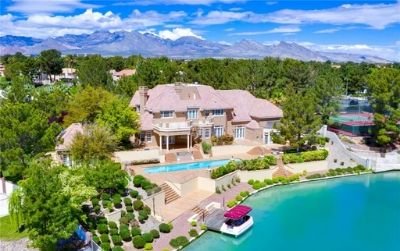 The two communities with Lake Front Homes in Las Vegas are The Lakes, which started in 1988, and Desert Shores, which began in 1992.

The Lakes community borders the middle of Summerlin, which is the largest master planned community in the United States. Desert Shores borders Summerlin to the north. Both neighborhoods are master-planned communities with lovely landscaping and homes throughout them.

If these neighborhoods are not to your taste or price point, there are also homes in communities with water and pond features. You might also want to try searching for homes on a golf course. See on our Golf Course Homes Search and Info Page.

The biggest difference between these two communities is that the lakes in Desert Shores have public recreation areas as well as private access areas. In contrast, The Lakes has only private access to most of the lake water. 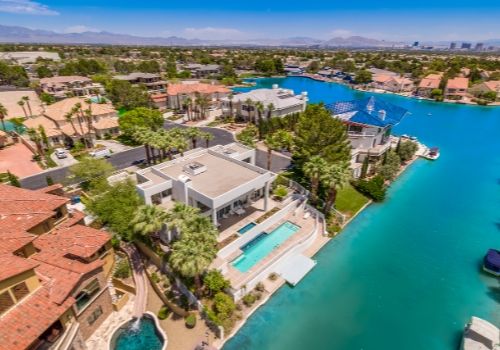 The Lakes originally began in the “middle of nowhere”. Now the location is very convenient. Some of the home communities completely surround the lakes preventing public access to any residents of the other approx. 4900 other homes in the community, as well as the public.

The biggest mistake the developer made at The Lakes was to build 5000 homes with no community parks. In the early 1990s Desert Breeze opened, which is a huge park to correct this problem. The lovely park features baseball fields, a public water park area and a community center, as well as a dozen soccer fields and a “Concert in the Park” area.

For me, driving through The Lakes is an enjoyable and beautiful experience every time. With the mature pine trees and meandering roads, a sense of peace surrounds the area. Put The Lakes on your “Must See” list just to relax and enjoy it. 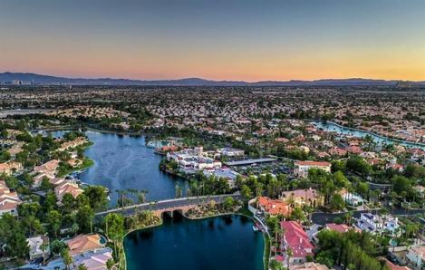 Desert Shores features exclusive private estates as well as residential tract and semi-custom homes. All residents have access to the clubhouse and beach club. The clubhouse is a highly sought after entertainment facility that is completely unique in Las Vegas.

The clubhouse area sides to the commercial area within Desert Shores. Within the commercial area you can enjoy coffee and tea in the sun or dine at the wine store and attatched restaurant directly on the lake. There are many stores as well as a medical and office center.

There is a private beach with a lifeguard on duty summer and warm weekends. Enjoy a friendly game of sand volleyball or go next door to the paddle boat rental area. Families of ducks and swans are a wonderful and interesting feature to enjoy within the community as are the fish stocked lakes.

Having multiple lakes, there are multiple communities within Desert Shores. They well planned out community ranging from condominiums to private boat docks and electric boats. Often pontoon boats are sold with the homes on the water.

During the recession, lakefront homes were the least affected by pricing drops. Water in Las Vegas is a rare and wonderful housing treat that you might want to look into. Searches are listed below.

We Wear Because We Care
Free Templates

Selling Your Home During COVID-19

Buying A Home While Social Distancing

Why I Wear A Mask